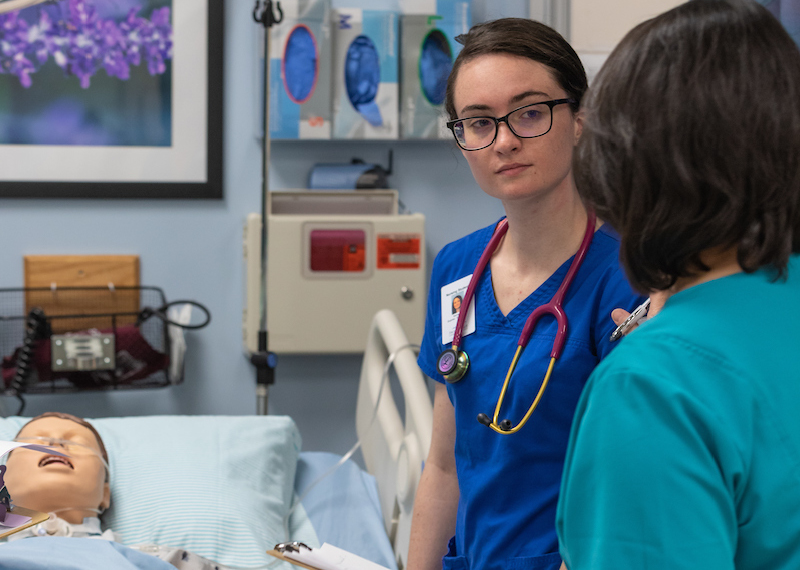 Landmark legislation off to a great start to help improve healthcare outcomes across Colorado.

CCCS developed this legislation in response to healthcare providers who expressed concern about the state’s looming shortage of registered nurses (RNs) and their growing need to employ RNs with a bachelor’s degree. The bill received robust support from a significant number of healthcare providers and industry organizations, economic development organizations, and elected officials.

The bachelor’s degree opens doors that were previously closed to RNs with a two-year degree. CCCS’s RN-to-BSN completion program includes courses in liberal arts and sciences such as sociology, psychology, leadership and the arts that contribute to overall critical thinking and understanding of the human condition.

Currently, 76 percent of two-year nursing program graduates in Colorado either do not transfer anywhere – exacerbating the shortage of BSNs – or transfer out of state to complete their BSN degree, taking their tuition dollars with them.

The lower cost of tuition and fees at community colleges makes the BSN program accessible to more students.

“Many hospitals will only hire RNs if they sign a contract committing to complete a Bachelor’s degree within a certain timeframe – so getting a BSN isn’t a choice, it’s a requirement,” said Kelsie Guthrie, nursing at Arapahoe Community College. “With expenses in Colorado on the rise, getting an education at a lower cost is incredibly important. If I have an affordable option to complete my BSN in Colorado, I most definitely will.”

In December 2020, Front Range Community College was the first in the CCCS system to graduate a cohort of BSN students, marking the institution’s first four-year degree award in its 52-year history. Though the Class of 2020 is a small one—with just two graduates—this is just the start of a budding program across the state. Hundreds more will follow suit in upcoming graduations.

“I do feel that I am better prepared to be in a professional nursing leadership role. The online format and [community college] cost was far more viable than that of any four-year university. It fit my lifestyle, budget and family plans. -Amy Larabee, Front Range Community College 2020 Nursing Graduate.

Amy Larabee, RN, BSN— Amy is currently the director of nursing for a 54-bed subacute rehab facility that provides inpatient nursing care and physical therapy for patients recovering from a hospital stay. She previously completed her Licensed Practical Nursing Certificate and Associate Degree in Nursing at FRCC. Amy decided she wanted to be a nurse at age six. She has four children and has worked full time while completing FRCC’s BSN program.

Melissa, RN, BSN—Melissa is a nurse at Denver Health Medical Center and has worked full-time while completing her BSN. She has always known she wanted to become a nurse, inspired by her grandmother. She also completed her Associate Degree in Nursing at FRCC.