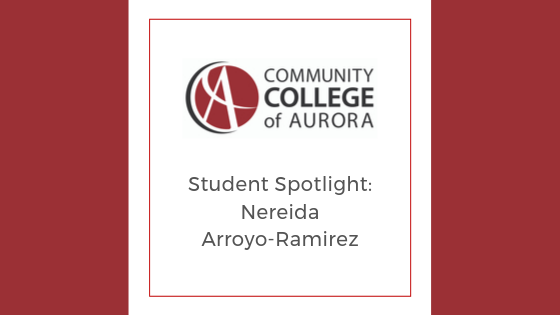 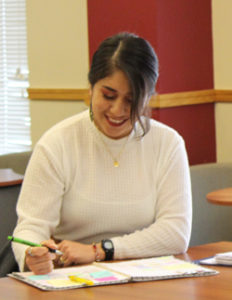 Nereida Arroyo-Ramirez is more than halfway to her bachelor’s degree and another step closer to her dream job of becoming an equine-specialized veterinarian and reproductive specialist at CSU. Her college timeline to completion was accelerated and costs for several courses covered while still in high school thanks to Concurrent Enrollment offered by CCCS Community College of Aurora.

Like many high school students, Arroyo-Ramirez had future aspirations, but the path wasn’t totally clear to her. “I knew what I wanted to do, but I didn’t know how to start,” she said. As a junior at Gateway High School in Aurora, Arroyo-Ramirez was spending her time as both a student and an athlete. It wasn’t until learning about and enrolling in the Concurrent Enrollment program that she was able to really consider her future and actively work her way toward it.

By her senior year of high school, Arroyo-Ramirez was enrolled in four college courses at the Community College of Aurora (CCA) and well on her way to completing her first semester of college.

Knock out as many prerequisites as you can. It’ll get you on the right path to doing what you truly enjoy.

- Arroyo-Ramirez, former CCA Concurrent Enrollment Student
Colorado’s Concurrent Enrollment program was created in 2009 through the State Legislature by thoughtful and innovative education leaders, including Chancellor Joe Garcia. The program prides itself on providing opportunities for more students, especially low income and underrepresented students, to increase college-going rates by earning college credit at no cost, that are transferable to any Colorado public college or university, while still in high school.

By her senior year in high school, Arroyo-Ramirez amassed 12 college credits through CCA. She recognizes it could have been even more, saying students should start earlier than their senior year and take advantage as soon as possible. Students who start as early as their freshman year of high school can complete multiple semesters of college, and even complete their entire associate’s degree – again at no cost – while still in high school.

Not only does concurrent enrollment propel students to a college career by allowing them to complete general education requirements, but it also teaches organization and time management skills that can prepare us for the college workload.

- Arroyo-Ramirez
These transferable college credits not only jump-start pathways to college, they also boost students’ confidence and “college-readiness.” For Arroyo-Ramirez, the Concurrent Enrollment saved her time and money, and CCA saved her stress.

Advisors at CCA helped guide Arroyo-Ramirez along her path, from planning her coursework at CCA to finding scholarships to attend CSU, and budgeting for her financial future. During her time at CCA, Arroyo-Ramirez was able to save money on tuition, allowing her to spend money on other things to make herself successful, like a new desk and a bookcase for home. And small student-to-teacher ratios at CCA meant increased opportunity to develop meaningful relationships with peers and professors. When Arroyo-Ramirez transferred to CSU, she says the process was seamless, because her advisors made sure all her credits would transfer.

Arroyo-Ramirez is well on her way to earning a bachelor’s degree and will only spend two years at a four-year institution; a huge cost savings. She is grateful for her experience and encourages others to follow in her footsteps. “Knock out as many prerequisites as you can. It’ll get you on the right path to doing what you truly enjoy.”

The Colorado Community College System, in partnership with high school districts, gives thousands of Colorado high school students the opportunity to earn both college and high school credit simultaneously. Courses may be taken on a college campus or in the high school. For more information about enrolling in Concurrent Enrollment, interested students and parents are encouraged to contact their local high school counselor.